CLEAN opposes on-going salt mining under Cayuga Lake due to the risk that subsidence may open hydraulic connection between Cayuga Lake and the mine or with pockets of brine between the mine and the lake.  This could further salinize our invaluable freshwater lake for many decades if not centuries to come.  In addition, subsidence along the shores of the lake or over the mine under the Town of Lansing can damage buildings and infrastructure.  A Cargill well survey has already discovered the first-ever reported brine seep at the edge of Cayuga Lake. Buildings in the floodplain portion of the City of Ithaca could be vulnerable to subsidence in the event of a catastrophic mine collapse should such a collapse have effects on overlying aquifers similar to those that occurred when the Retsof Salt Mine collapsed in Livingston County in 1994..

CLEAN urges all residents of Central New York to oppose all present and future mining of salt under and beside Cayuga Lake.  CLEAN’s research team would be grateful to all recipients of a recently-mailed survey if you would mail back your responses to the survey.

So, what is subsidence? 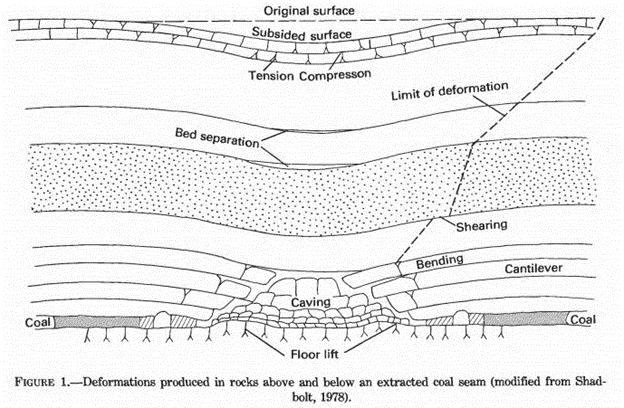 Cargill and American Rock Salt are both required by law to release data on ground subsidence related to their salt mines to the DEC.  Cargill’s compliance appears to have been incomplete and possibly to have ended in 2014.  The DEC has been unable or unwilling to release subsidence to CLEAN under FOIL (Freedom of Information Law) for measurements more recent than data gathered in 2014.

Design of Cargill’s early subsidence monitoring system was described in a 2002 memo by a Cargill consultant as follows in the box below. 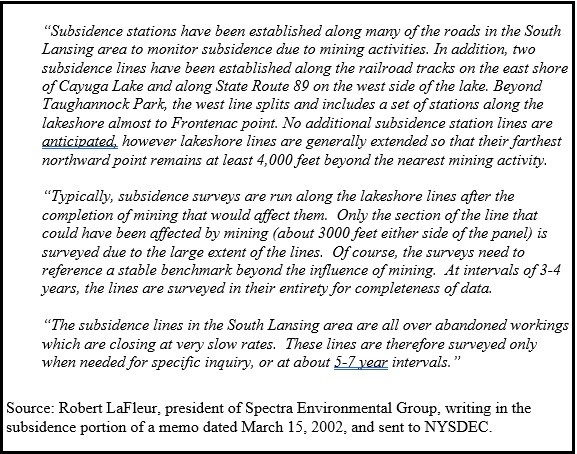 Mr. LaFleur describes a seemingly reasonable easy-to-implement approach to subsidence monitoring.  However, the plan and its implementation have had some flaws, such as: 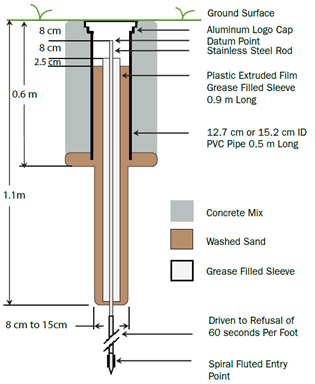 The above type of elevation station costs several hundred times more than a railroad spike driven into NYSEG utility pole, or a nail driven into a Norfolk and Southern railroad tie or simply shooting elevations of the top of Town of Lansing fire hydrants.  As can be seen in the figure, the grease-filled sleeve allows the stainless steel rod to be in firm contact with bedrock or firm soil well below the frost line.  Such a device installed in the ground and owned and maintained by the mining company enables the creation of a reliable, long-lasting elevation monitoring system that will not be disrupted by periodic replacement of culverts, fire hydrants, railroad ties, or utility poles by other companies or by municipalities.

Table 1 below shows average and maximum subsidence rates calculated for three areas in the Town of Lansing. 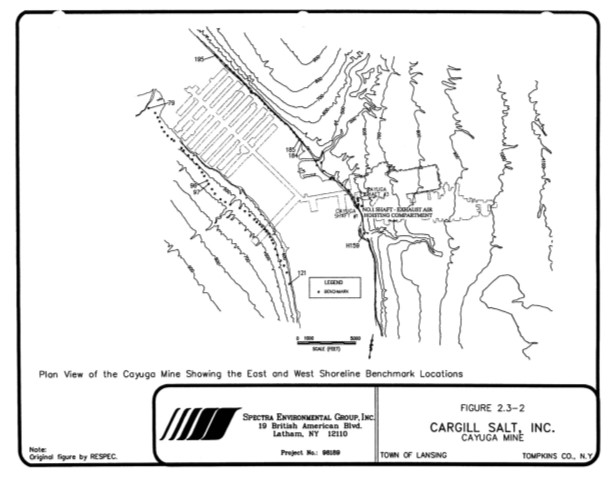 The above map, labelled Figure 2.3-2, is the only map that the DEC has released to CLEAN regarding monitoring of subsidence during the 41-year period, 1979-2020. In Cargill’s 2020 annual report to the DEC, it is written that “In 2020, Cargill facilitated completion of subsidence surveys for the west shoreline, east shoreline, Town of Lansing and #4 Shaft area.  All results were well within expected ranges.”  If the results are so expected, why not show a map and show the actual data?  A second FOIL request asking for subsidence data for Cayuga Salt Mine for 2015 to present is likely to be replied to with the cryptic reply, “No responsive records.”

Here are some questions we have regarding, the above map:

And yet, DEC has only released subsidence data for one elevation station on Cargill’s property.  This is station E-N175, which is described as “P.K. nail at top of cone column @ SW corner of Bldg T4.” This is a relatively new station with released data covering only the period 2007 to 2014.

What happened to the data for the other older shoreline stations presumably established in 1979 and shown on the RESPEC-Spectra Map of Year 2000?

Why is E-N175 the only station for which data are being released from the several hundred acres over the mine under the Town owned by Cargill and by Cayuga Crushed Stone?

We are not aware of any elevation stations located along Portland Point Road, which extends for a distance of about 1.5 miles over the mine and its potential subsidence zone.  The closest two are the station owned by the federal government on the railroad at Portland Point (H159) and a fire hydrant station (D-8) located on Route 34B just east of the T-intersection with Portland Point Road.

Mr. LaFleur wrote in his methodology that stations would be extended 4000 feet out ahead of mining zones. However, station D-8 is reportedly the last station going west on Route 34B despite the fact that the mine near Route 34B extends another 1000 feet to the west and the potential subsidence zone for the mine goes west more than 2600 feet west of Station D-8.  Is Cargill disregarding the methodology created by its own consultant?

Considering that underground mining started in Lansing in 1918 and that, according to Cargill’s consultants, subsidence related to this mining can take up to 200 years to fully occur, the piecemeal amounts of subsidence data that the DEC has been willing to release appear to be very incomplete. CLEAN advocates for more systematic collection and release of subsidence data to all property owners within potential subsidence zones.

CLEAN does not provide legal advice, but our preliminary research indicates that unlike some states where underground mining is more common, New York State lacks legislation to protect property owners from mine-related subsidence.  Similarly, we do not know of any insurance companies that write policies here in central New York that would cover damage to a structure from mine-related subsidence.  In coal mining states where the Federal Surface Mining and Reclamation Act (SMRA) applies and where many states have passed their own state-level versions of SMRA, cases of damage only relate to coal mining and they are rarely litigated.

In those instances where mining companies have agreed to conduct pre-mining inspections of properties prior to mining under or near that property, it then becomes the burden of the mining company to prove that their mining did not cause any structural damage that occurred after mining had commenced. To our knowledge, Cargill does not engage in any premining surveys of structures over or within the potential subsidence zones of Cayuga Salt Mine.

In one case, the court held that a mining company only needed to pay a portion of the cost of building a new school at a new location, because the school district had known they were building a school over a mine, but had nonetheless failed to require that subsidence-resistance be incorporated into the design of the school’s foundations.

Cargill’s purchase of mineral rights from landowners in the Town of Lansing is kept relatively secret.  Apparently, there may be language to the effect that “Cargill will never need to enter your property” when in fact the more appropriate language would be “Cargill will establish elevation stations at various locations on your property, will monitor elevations regularly and will instruct their survey consultants to share all survey data for your property with you directly.”

CLEAN is not saying “The sky is falling” with respect to ground subsidence caused by the mining of salt under land and under Cayuga Lake.  Cargill uses modern mining techniques and is regulated by both the NYSDEC and by MSHA, the Mine Safety and Health Administration of the US Dept of Labor.  However, we are saying that a certain amount of land subsidence is inevitable and that subsidence within the mine’s potential subsidence zone needs to be carefully monitored and the resulting data released into the public domain without the need for FOIL or other requests.

Also, Cargill needs to be held accountable for any damage caused by mine-related subsidence.  And Cargill’s mining under Cayuga Lake needs to end as soon as possible. A catastrophic mine collapse under the lake could result in significant subsidence damage to buildings and infrastructure in the floodplain areas of Ithaca.  Such a collapse could also result in a hydraulic connection being established between the flooded mine and Cayuga Lake with the potential for brine leaking back out into the lake for hundreds of years.

It would be most helpful to hear from property owners in response to a survey mailed out in April 2022.