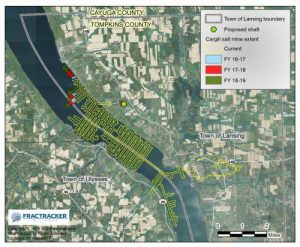 Or that brine-contaminated water flows into Cayuga Lake from the Portland Point area every day.
Cargill leases the under lake mined land from New York State. Our State agencies, including the DEC, should stand up for all of us. The Tompkins County Supreme Court has the power to set aside DEC’s imprudent approval of the Cargill expansion without sufficient environmental review.

Damage to the Lake—the value in dollars could be staggering—would be greater than any financial benefit to the local economy or Cargill. Damage and loss to us and future generations is incalculable. Shouldn’t our children and grandchildren and all future generations have an unspoiled and healthy inheritance?

SECRECY BY CARGILL AND COMPLICITY BY the NYS DEC

Cargill’ relationship with DEC is much too cozy. DEC must break from years of caving to Cargill on each under-the-lake mine expansion. Cargill claims that each step in its expansion process is unrelated to past (and future) mining plans and their associated, cumulative environmental risks. This method of proceeding by Cargill, called “Segmentation”, is a charade that should stop now—and the Court has full power to declare it a charade. 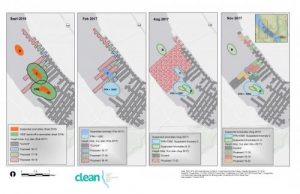 Cargill conducted a 2016 seismic study to identify in detail the geological conditions beneath the Lake. Why won’t Cargill release this study that clarifies the risks? DEC claims they don’t have the study. To understand the risk involved, we need to know more about geologically weak areas under the Lake and rock fractures in the area of the proposed shaft.

Can you imagine a more saline Cayuga Lake after a mine collapse? Affecting those who drink from the Lake, swim, fish or recreate on the lake. What about the risk to the miners? What about the plants and animals who live in and around the lake and are affected by changes in salinity more than humans? Salt mining has already raised sodium levels in the lake to twice the EPA threshold for people with hypertension.
CLEAN’S EXPERTS HAVE DOCUMENTED THE RISKS/DANGERS IN CARGILL’S PROJECT TO EXPAND
An eminent salt geologist warns in his report of the risk of mine collapse. He is joined by other highly qualified experts supporting CLEAN’s requests for additional information to complete the assessment of risk.

Deformation at the ground surface is a common feature above and adjacent to many areas which host underground mining. Subsidence is a term which refers to the downward (vertical) component of this deformation. Subsidence is a process which can result from naturally-occurring processes, or as a result of human activity, such as the removal of material at depth. In the case of mining, deformation at the ground surface occurs after an underlying area is extracted, and the resultant spatial and temporal pattern of subsidence may be complicated depending on the layout and development of an individual mining operation. Because it can compromise the integrity of structures and alter the character of the surface landscape, it’s a good idea to monitor deformation in areas where mine voids slowly close subsequent to mining, a process that can take hundreds of years to complete.

Limited publicly-available data from the past 35 years of monitoring show subsidence as high as 2.35 ft on terrestrial areas adjacent to Cayuga Lake, and consultants hired by the mine operators predict a maximum subsidence value of 5.5 ft will occur at the floor of Cayuga Lake (Spectra, 2000).

This subsidence prediction assumes a normal mine closure scenario with an approximately 200-year time-frame for the closure of mining voids. Subsidence can be highly variable in its magnitude and rate, depending on factors such as mine stability. Any abnormal roof or pillar failure within the mine could significantly alter the dynamic response of the overlying strata, including those important to construction and regional water resources.

Although the majority of mining currently takes place beneath the lake, a number of properties in the vicinity of the mine fall within areas likely to be affected by subsidence after the underlying material is mined.

Areas at the surface which are either currently affected by subsidence or expected to be affected in the future occur along the east and west shores of Cayuga Lake and in Lansing east of the shoreline between Myers and Portland Points, as well as above a newly-mined tunnel near Sweazey Rd. in Lansing. These determinations are supported by data collected by the mine operators, who currently operate a network of subsidence monitoring stations, as well as input from outside consultants. At present, some properties adjacent to recently mined and soon-to-be-mined areas are more than one half mile from any known subsidence monitoring station, and the stability of some of the presently-installed stations is in question.

CLEAN is beginning a long-term program which will allow homeowners in potentially-affected areas to monitor subsidence independently of the mine operators. This program will allow homeowners to monitor and protect the integrity of their structures and water resources for decades to come by installing well-constructed subsidence monitoring stations on their properties. If you have property along the lake other otherwise close to Cayuga Salt Mine, please consider enrolling your property in a new subsidence study.

Cayuga Lake is at the center of who we are as a community. The Lake benefits all our community. Cargill leases the under lake mined land from New York State. Our State agencies, including the DEC, should stand up for all of us. The Tompkins County Supreme Court has the power to set aside DEC’s imprudent approval of the Cargill expansion without sufficient environmental review.