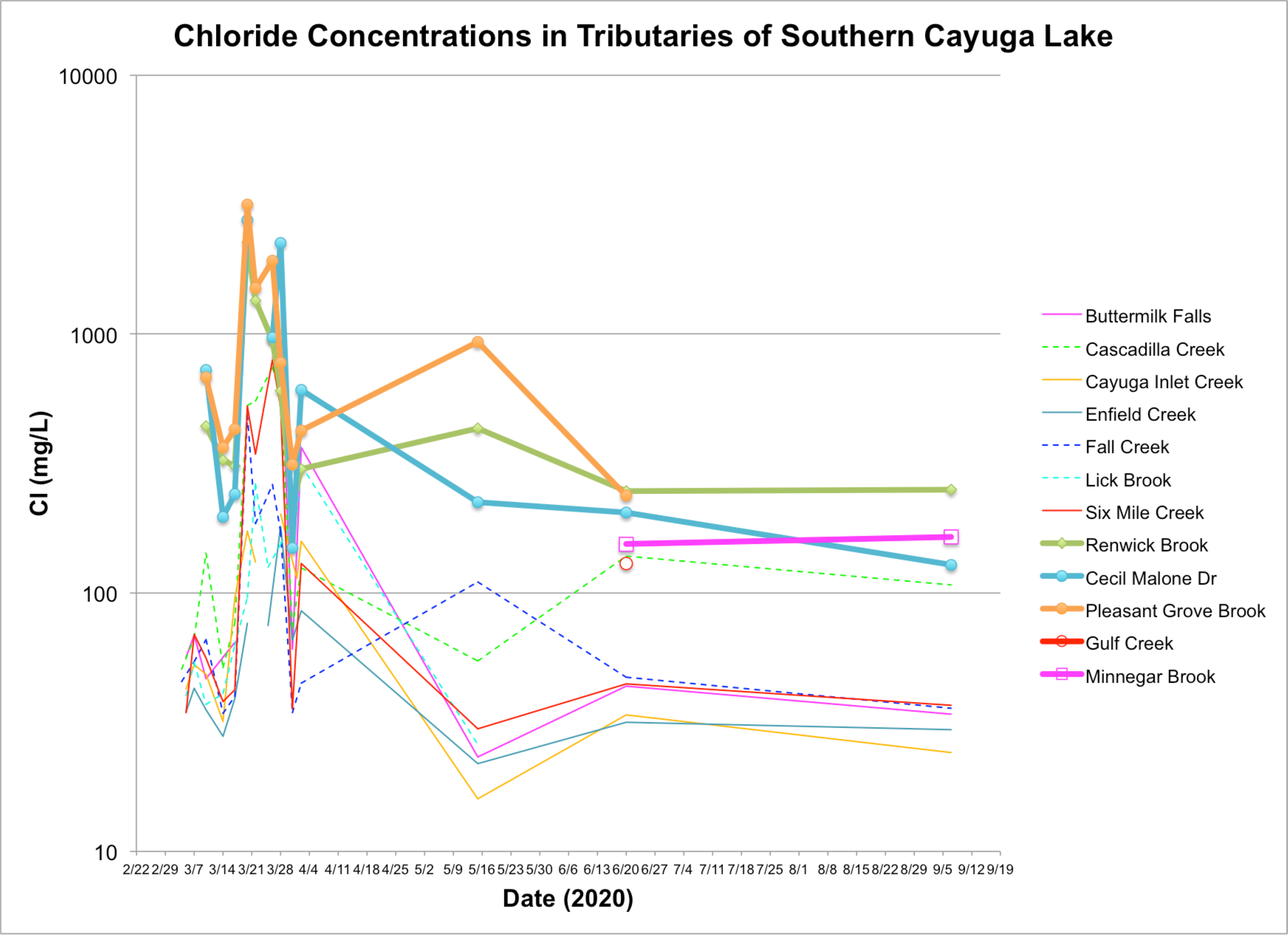 For many of us in the Northeast US, March is a time of year when the snow and ice of winter diminishes and we see signs of spring. As the snow melts and we receive the rains of spring, CLEAN researchers have been monitoring tributaries that flow into the southern end of Cayuga Lake, paying particular attention to the chloride levels in the many creeks, brooks, and streams. Sodium chloride, the road salt applied to roadways and sidewalks to keep them clear and safe for use in the winter, washes into nearby waterbodies, raising the salinity and alkalinity of water supplies and negatively affecting wildlife.

According to the Cary Institute of Ecosystem Studies in Milbrook, NY, forty-four percent of Midwestern and Northeastern freshwater lakes show long-term increases in chloride and salinization, and this has been attributed to roadsalt use and nearby development in those cases. Between 15 and 32 million metric tons of road salt is applied in the United States each year. This salt eventually ends up in our groundwater, lakes and rivers. Other sources of salt that shows up in water bodies can include potassium-rich fertilizers, fracking brine, sewage, and mine drainage. These rising levels of salinity can cause problems for wildlife and humans alike by influencing plankton and fish populations, posing health risks to humans who drink the water, and corroding pipes and other infrastructure. Freshwater bodies near roadways are most vulnerable to receiving runoff from salted roadways, but roadsalt can also wash into groundwater where it can take decades to be flushed out of a watershed.

CLEAN has been monitoring chloride levels in some of the tributaries that flow into the southern portion of Cayuga Lake. Using our Manta+2 water probe, we visit each sampling point and take readings to determine the chloride levels during both rainy and dry periods. While we can’t continuously monitor each tributary, this work is helping us gain insight into where and when high levels of chloride are flowing into the lake, and a sense of the magnitude of the influx. We are finding that chloride levels can vary greatly day-to-day and place to place, with the smaller tributaries that flow through developed areas showing much higher concentrations of chloride than in many of the larger creeks. We hope that this work will guide residents and towns to take action to minimize the amount of roadsalt applied, which will alleviate some of the concerns around rising salinity levels in Cayuga Lake.

Strategies that your town can use to reduce salt pollution: